Legislative Solutions Under Consideration in 2017

LOWERING PRESCRIPTION DRUG PRICES: In the chaos of current Washington, there is little to like and much to fear. But babies and bathwater being different, CCAG notes that the President said he wants to reign in drug prices. This could be a year of opportunity. In 2017, CCAG’s focus will be on market transparency and price limitations for expensive drugs. The transparency approach emphasizes putting hard-to-find price information into the hands of regulators, the public, or both. (Easy price comparison is the engine of market competition, and it is in short supply thanks to the Big Pharma lobby.) On the other hand, price controls can include outright setting of upper limits, or merely the triggering of cost transparency in the face of a rising prices. Roughly 40 states are working on bills in these areas. CCAG will be making this push as the best path forward in CT.

PROTECT EXISTING HEALTHCARE ACCESS FROM ATTACK: CCAG raised the issues that led to the blocking of anti-competitive mergers in the insurance industry (Anthem- CIGNA, Humana-Aetna). Good, but this drama may not be over. Meanwhile, HUSKY A is under attack at the Legislature. The proposed budget would separate approximately 9500 low-income parents from their healthcare. Past cuts (2 years ago about 16,000 were cut) indicate that many eligible children also lose coverage due to confusion.

HOSPITAL MERGERS: These mergers threaten competition on a more local level. CCAG continues information/organizing meetings with local constituents, particularly in Eastern Connecticut and greater Waterbury. We carry voices for patient and worker protections into the complex negotiations of for-profit mega-chains eating up local (often non-profit) hospitals. Specifics include CCAG support for HB6035 and SB248 (e.g., service providers would need to show need when reducing services in a given community). We oppose HB5168 (removes consumer protections/service guarantees). We support SB451 and HB6051, protecting patients from unreasonable and surprise billing.

​VICTORY!
The proposed insurance mergers (see details immediately below) were NOT approved. CCAG and its allies worked hard to raise the clear conflict-of-interest issues and thus wake up regulatory control in CT and beyond. We were successful. Yet competition remains somewhat anemic. Five major insurers are not enough. But five is still much, much better than the mere three which would have been left IF the mergers had taken place.

Under the new Administration in Washington, this issue may come up again. CCAG is watching closely. The disastrous proposed repeal of the Affordable Health Care Act lurches forward. The so-called "replacement plan" is ridiculously bad and needs allies desperately. Unsavory deal-making MAY bring the merger issue back. For instance, a recent New York Times article detailed an apparent attempt by one of the insurance giants to court the Trump Administration by supporting ACA repeal against the industry's own apparent interests and past rhetoric. The Times author speculated that the support might be an attempt to gain a rubber stamp for future merger proposals. 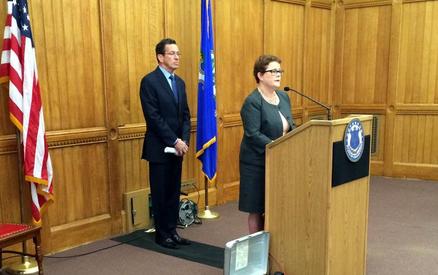 Photo: Dannel MalloyFlickr/Creative Commons- Sign the Petition!
Governor Malloy- Do Not Go Back to Days of "Corrupticut"!

The International Business Times published a blockbuster story on the proposed sale of Cigna to the Anthem Corporation, which would create the largest health insurance corporation in history. The story describes the egregious conflicts of interest that our Insurance Commissioner has in participating in any aspect of the review process, including having recently served as a lobbyist for Cigna, her husband still working at Cigna, and her arranging for regular phone calls with the companies to discuss progress in other states. On top of that, the story outlines how these companies have been giving money to political committees related to Governor Malloy in a manner that reminds us of the dark days of John Rowland.

If this isn't bad enough, the Insurance Commissioner just announced that she had chosen not to hold a hearing or any public process on the Aetna/Humana merger six months before. Her refusal to use any of her leverage to protect Connecticut jobs and consumers in this proposed deal, combined with her unethical behavior on the proposed Cigna deal, says to us that she is still working for the insurance companies in stacking the deck against the rest of us.
​
Connecticut Groups Call For Dan Malloy To Remove Insurance Regulator In Anthem-Cigna Merger- International Business Times By David Sirota @davidsirota AND Clark Mindock @cla

INSURANCE COMPANY MERGERS: Concerned about the impact of the pending $54 billion merger of Anthem with Bloomfield-based Cigna, CCAG has joined with The Universal Health Foundation and the CT State Medical Society to form the CT Campaign for Consumer Choice.  An Anthem-Cigna merger would create the nation’s largest health insurer, with large impact on patients, doctors, hospitals, and our state’s economy. The CT Campaign for Consumer Choice is educating consumers and families, and fighting for thorough and public review of any pending mergers. To see more info and protect your interests, visit: www.consumerchoicect.org. Go to our Home page to see the latest, and to sign a petition asking the Insurance Commissioner to recuse herself from ruling on the merger. She has held no public hearings, and seems to be acting more like an Insurance Company employee (which she was) than a consumer protector.

HOSPITAL MERGERS AND CONVERSIONS: Similar to the above merger, for-profit hospital networks are buying up local non-profit hospitals in a nation-wide wave. CT is no exception, as in, for example, the proposed takeover of L+M Hospital by the Yale New Haven Health System network. Experience shows that despite promises made, consumers/patients often lose choice and services, while costs and profits rise unabated. Protecting consumer/patient interests during these mergers is the key organizing area for CCAG in 2016. Currently, support is coalescing around outlawing any merger that gives a single corporate entity control of more than 20% of the healthcare market in any region that includes parts of CT, which may give rise to future legislation.
​

On March 7th, CCAG organized an event at the Mitchell College Weller Center, University of New Haven. See the invitation below. Contact Ann Pratt (ann.prattccag@gmail.com) info on how it went.